When the Kala Chashma of Bollywood has taken a toll on your parties and the JIO Launch has made you a bit more digitalized, here’s a newbie in the food world to punch in some more drama and action into your lives.

Rajouri Garden, every Delhite’s second Paradise of Food, the first being our very own Connaught Place, welcomes a DRAMATIC arrival with DRAMA. Well, if you are wondering what’s this drama buzz is all about; take a glimpse into DRAMA’s world, through our eyes.

Welcome to An Upside Down World

As you enter this joint located in Rajouri Garden, you realize the world has suddenly metamorphosed into an upside down one. From arte-facts to stools, tables and bookshelves, everything is positioned in an upside down manner feeding you a real chunk of drama. And as you head towards the other two floors, you find the “drama” unrolling slowly from food to every nook and corner of this lavish joint. You have an elaborate upside down ferrari, an awesome selfie joint, some uber cool presentation arrangements and what not.

Now coming to the interesting menu of this curious delicacy station, Delhi, being a home to multitudes of themed restaurants is indeed a happening place to satiate your appetites. But DRAMA with its innovative ideas has managed to steal the show with its amazing architecture and mind blowing food.

Well, when you come across paintings of Monalisa after 4 Pegs down, the brains behind such ideas deserve all the applause.

After winning our hearts with its ambience, it was now time to make our ways to some culinary treats and here the Bon Apetite sparks off. We came across some amazing names and each of them evoking some curious wish to be a part of the thrilling delicacy.

The Chatpati Chameli that had the tangy tastes of tamarind spiced up with some vodka was our escort to the food journey.

Now coming to the main course, DRAMA has too much of dramatic episodes involved in it beginning from The Twitter Tangdi that is a delicacy with chicken leg pieces that have been cooked and presented with the blue flavours of the social media world of Twitter.

You also have the show stopper appearance of Agneepath Chicken served on a railway kind of arte-fact, trying to take your meals more dramatic.

Our encounter with the Pinjra Chicken was the best where you have almost the entire chicken breast served in a caged set up, justifying every inch of its name truly. 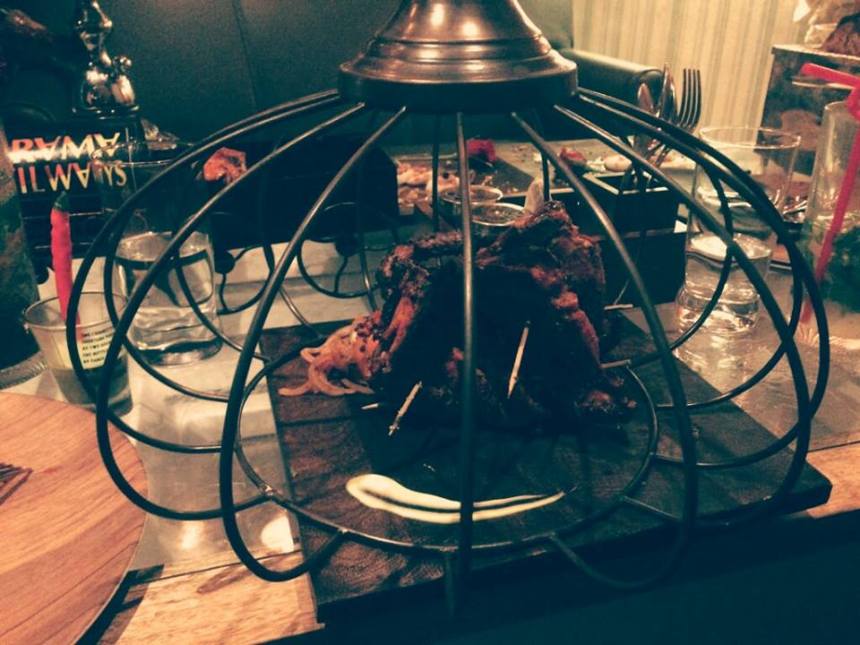 The dramatic affair of DRAMA came to a delectable end with the Rasgulla treat where the entire Rasgulla was chopped into several pieces and served with caramelised sauce and tits and bits of nuts was indeed a relishing finish.

The Agni Lava Brownie was also an interesting affair between a sumptuous brownie with a dash of white rum, fondant as well as cream.

Nitin Kapoor, Dinesh Arora and Swaraj Singhi, do take a bow for infusing such amazing ideas into the food industries, which make the kitchens of Delhi more amazing.